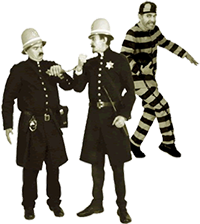 The bungling Kops as hard as they try are (as ever) incapable of apprehending their quarry – the elusive escaped convict ‘Slippery Jack’. On the run from law and order with his ball and chain in tow, Jack outwits the Kops at every twist and turn with his nimble guile and cunning disguises – who would ever suspect a standard lamp, or that man with the impossible moustache…? Could those Crazy Kops really be even more stupid than they look !

In keeping with the silent movie era, this show is a faithful reproduction of the original farcical slapstick films from the Keystone studios and it is performed as black and white ‘Silent Theatre’ – a mime based physical theatre walkabout show, but with each performer controlling their own musical accompaniment and slapstick sound effects. Authentic ‘Rag Time’ music is used, amongst an array of evocative sound effects, and scene setting piano scores. Each performer has a concealed state of the art miniaturised personal PA system with remote controller, giving each performer superb improvisational control, freedom and flexibility to set their own scene and mood.

The show comprises either two or three Kops (as per requirements) with push scooter, and one convict. For a brief history of the Keystone Cops you can visit the Wikipedia website: Keystone Cops