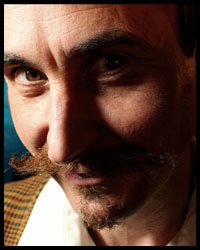 Paul’s creative career properly commenced in 1997 when he quit the world of mechanical engineering, having had his fill of diesel engines, shipping schedules, fire-pumps, and propulsion units. The desire to act had always been present and with the approach of his 30’s he took that deep breath required when one frees oneself from the shackles of regular wages, daily commutes, and job security. Though his practical nature, and understanding of materials and mechanisms has proved to be an invaluable skill-set in many situations.

Early acting work set the scene for the years to come, with an engagement playing Shakespearean roles for The Albion Shakespeare Company in a 1997 national tour, and Paul performed in the plays of Shakespeare annually through the late 90’s and early 00’s. Some favourite roles being; Feste in Twelfth Night, Silvius and Amiens in As You Like It, and Banquo in Macbeth. Deciding to remain based in East Anglia, Paul has developed strong links with many of the region’s best loved theatre companies, from the classical stylings of – Mad Dogs & Englishmen, through the quirky lyrical idiosyncratic Spin Off Theatre, with whom he has co-devised many shows featuring regional dialect and local history, and ever onward. More recently Paul worked with Norwich Puppet Theatre, where he performed and co-devised their 2012/13 Christmas show and tour: The Tinderbox. Paul’s practical nature has led him into stage-management and set construction work, stage-managing tours for Mad Dogs, Norwich Puppet Theatre, and Suffolk’s Eastern Angles. He continues to work in theatre whenever possible, always looking for work that challenges, and extends his experience of the discipline.

An innate ability to improvise, and an instinctive, playful, nature led Paul into the world of Street Theatre, working with Norwich based Theatre of Adventure performing, devising new works, and generally having fun. It was here that Nick and Paul met (Paul and Bert had worked together for Spin Off a few years before) and their shared fascination with how things work, and improvisation, led naturally to a fertile creative partnership. Paul joined forces with Stuff and Things in 2006, initially developing Carpet Man & Lino Boy with Nick. A travelling pantechnicon of freewheeling flooring based delights, Carpet Man & Lino Boy focussed on both performer’s strengths and has led on to the development of Nick’s brainchild The Thinker, a show which showcases Nick’s mime and improvisation expertise, and Paul’s quick-fire wit and linguistic versatility.

Paul’s constant desire for fresh challenge has led him into the world of cabaret – he was resident compere at Hocus Pocus Theatre‘s No Strings Burlesque Cabaret, and he continues to perform in many venues, and at festivals, clubs, and events, nationally. He is also one half of cabaret double act Lipstick & Wax, with international burlesque showgirl Natalya Umanska. They have performed their signature act El Carton del Muerte at events in Berlin, Stockholm, Amsterdam, and Montreal, as well as festivals and cabarets across the UK.

A lifelong love of music and desire to perform has also seen Paul work as frontman for various bands, and he is currently busy working as a DJ within the UK, and internationally, using his eclectic musical acumen and verbal dexterity with Rotterdam based Silent Disco – who take the concept of disco and give it an inventive twist by utilising high quality headphone/receivers and FM transmission technology to deliver a unique clubbing experience to parties, festivals, and club nights all over the world – he operates under the moniker DJ Vincent 1000.

Always interested in discussing ideas, opportunities, and offers of work, Paul can be contacted directly here: pprestonmills@yahoo.com and Paul’s theatrical CV can be accessed by clicking here.