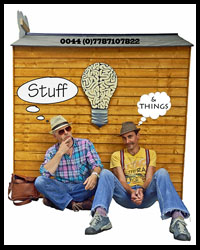 Edmond Tahl was the beginning of the Company’s history back in 2000 when he was born mostly by accident – the combination of needing to find a character for another show, and the gift of a Bowler hat was his beginning. Add in a suitcase with a thrown together PA system, and that was that. After three seasons of increasingly successful touring with Edmond, Nick and old friend Bert Eke talked about the possibilities of co-writing some new shows and forming a street theatre company. And so ‘Stuff & Things’  was born in 2003; but the name had arisen a few years previously –  from an early morning/late night moment at Glastonbury Festival after an extended tour round the stone circle, persuading the assembled brethren that life was all about  ‘Stuff & Things’ – I guess you had to be there.

Our philosophy has always been very simple – to entertain both our audiences and ourselves – if it makes us laugh then it has passed the test. More recent years have also introduced more complicated fulfilment needs in terms of very consciously penetrating the nonsense of the fabric of the world and delivering alternative perspectives upon it. Of course making a living at a job you love plays a huge part as well, but Paul, Bert and Nick would still be doing creative performance art in some form, even if it wasn’t professionally – indeed that is how they originally met and sometimes still do.

The Company takes great pride in producing each of its shows to the very best of its abilities, with great attention to detail – from props and costume, to publicity and ultimately the performances themselves. Nick, Bert and Paul have a huge skill base between them, from other professional careers that they can rely on –  stage acting, performance art, prop/set/costume design, sculpture, mechanical & electrical engineering, blacksmithing, photography, videography, film making, directing, sound engineering, DJing, singing & playing music.  This huge set of resources means that the company has the capability to take show ideas from their very conception right through to their ultimate performance, without compromising either their quality or integrity.

We used to be an entirely self funding company, until 2011 when we received an arts council grant for audiObscura, with a large percentage of our profits being reinvested for the development of new work. Traditionally this is done in the winter months, with new shows being finished for early spring. As of 2012 the company has eight shows on its books, which are all designed to fill slightly different performance criteria in terms of booking/venue/artistic requirements. We are most interested in improvisational walkabout street theatre – as performers we feel most alive and excited when in the moment of leaving the dressing room (or car park), we don’t know what to expect. This kind of buzz is much less pronounced in the theatre or on a film set. If your audience on the street wants to let you know what they think of you they will. With all street theatre every performance is different to the last one, but when it is improvisational walkabout you are stepping off a small cliff of uncertainty every time. The exception to this rule is audiObscura which employs lots of electronic wizardry to animate the inanimated.

Our hearts are in pushing boundaries, pressing buttons (not just the on/off ones), and using comedy to help resonate alternate perspectives with audiences. We are not the most successful street theatre company in terms of money, but we hope we are in other more important ways.

The company has recently moved in developing technologies to assist other artists with their performance needs – primarily that of PA systems – from which the audiObscura technology was born out of.

The company has always had strong links with Theatre of Adventure (another Norwich based theatre company), with both the design of props and theatre rigs, and the pooling of performers. Nick designs and fabricates all of the companies own rigs with assistance from Paul, and welcomes commissions of all types – (contact him here).

We take great pride in presenting sublime, quirky, and unique work – new shows are never far away from development, so if you have enjoyed what you have experienced so far, please come back again for something completely different.